Yesterday a tiny new drone arrived at my door. I have never had much luck with brushed whoops. Failing or under powered motors, terrible cameras and weak frames have seen several projects fall by the wayside so I never really got behind the pocket drone movement until now.

If you’d to skip the words check the video below for a condensed 60 second review.

The Tiny Attack is the latest offering to the micro market going up against some popular 1S choices like the Emax Tinyhawk or Beta 65 pro. I wasn’t given this to review. It’s just the first one that I really liked the look of at a really good price.

Unlike the Tinyhawk, the Tiny Attack has a carbon frame (1mm) in a true X configuration with a plastic canopy covering the electronics. It’s a more traditional miniature quad rather than a new type of platform. 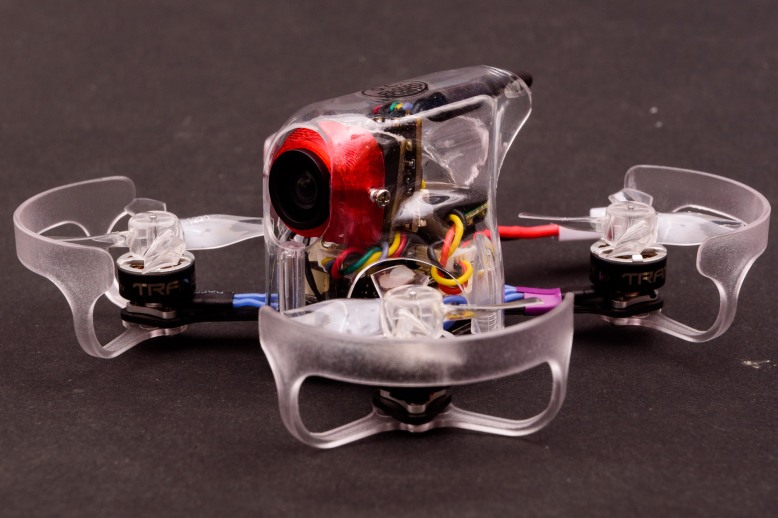 Speaking of electronics it’s pretty well specced, with an F411 OSD flight controller and a 10A 4in1 with Transtec 0806 22,000kv motors and a Caddix Firefly 1200TVL camera / 25mw VTX combo with whip antenna. Props are the excellent Gemfan 31mm quad blades.

The quad is supplied with removable prop guards (not ducts). So flight characteristics are less like a whoop and a little more like the big quads we all know and love.

What’s in the box: 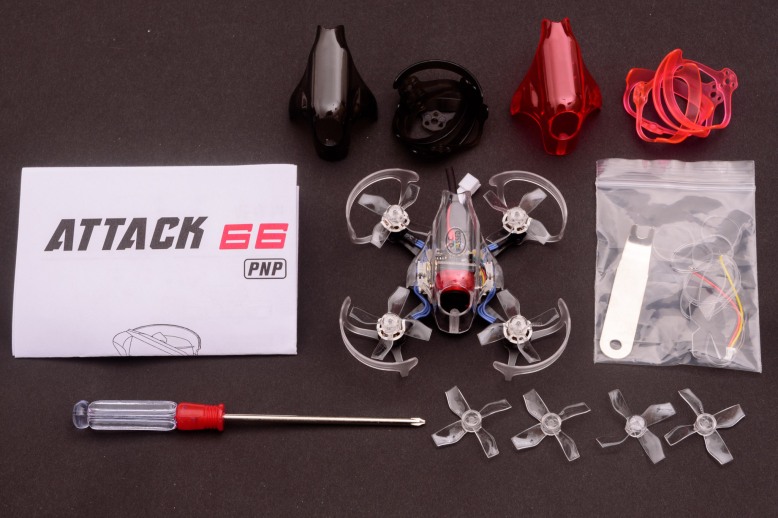 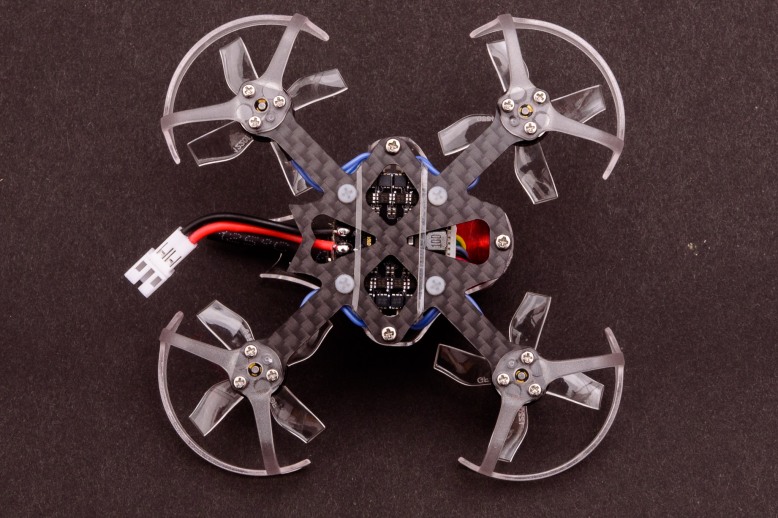 The frame is 1mm thick and very nicely cut. The quality is good as it’s taken quite a few hard crashes so far. The FC mounts on Nylon standoffs while the canopy is attached with three cross head screws. 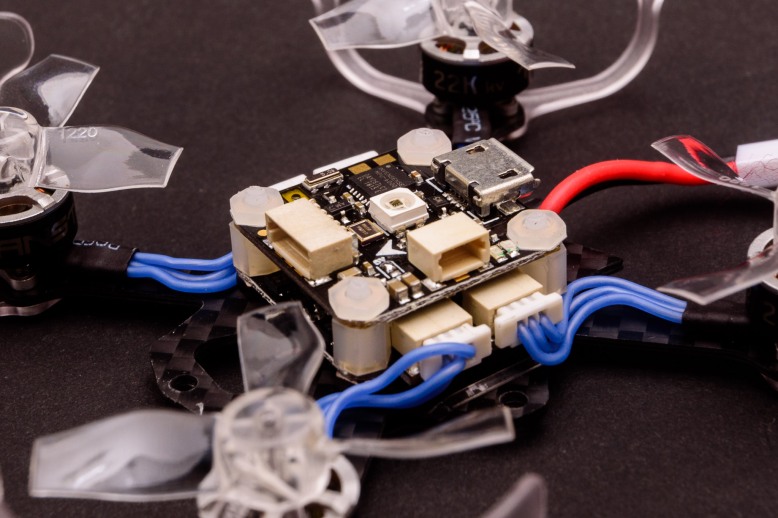 Custom F411 OSD and custom 10A 4in1 BLHeli_S ESC connected by pin headers. On larger, heavier boards these pin header connections can be a problem – evident on the HGLRC 20mm stacks. Hopefully at this weight it won’t be an issue but only time will tell. The FC has one plug for the RX and one for the Caddix camera while the ESC has plugs for the motors. No soldering is required to the boards themselves which makes replacing motors nice and easy. 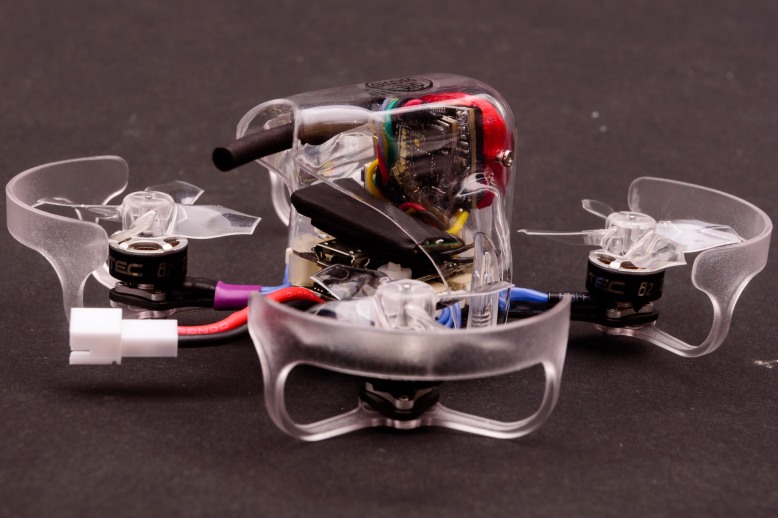 Caddix Firefly AIO 1200TVL 2.1. I have to say this is a great choice Although it doesn’t compare to something like a Predator or Falkor (my personal choice) for WDR performance it’s sharp and colours are vivid. It’s everything you need in a whoop. The whip antenna is attached to the VTX, not the canopy but it is well protected. The canopy offers plenty of room to angle the lens up front but actually moving the setup is a bit of a pain. I found I had to re attach the VTX to the camera to change the angle. 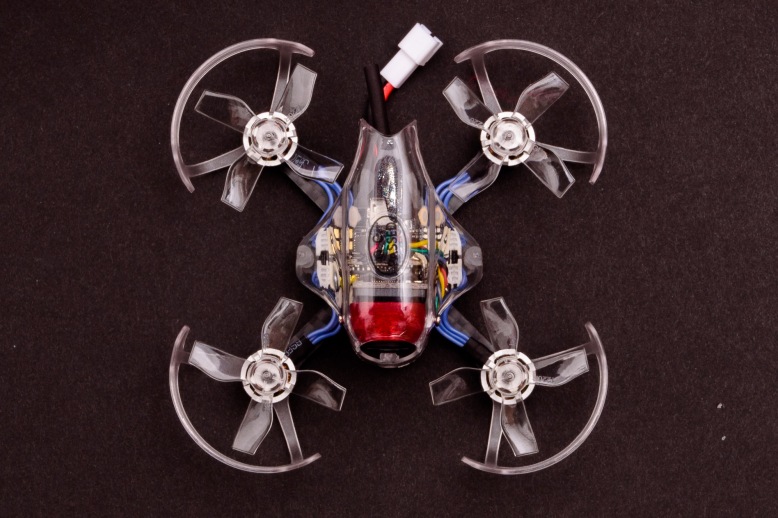 Motors are Transtec’s own 0802 22,000kv. This is higher than the tinyhawk’s 15,000kv but swings smaller 31mm Gemfan props. This results in all the real power being right at the top of the stick range. You definitely have the most fun when pinning the throttle. The flip side of this is that once you are used to the different feel of low and high throttle it’s also very easy to control when you just want to hover around your front room due to the slower response at low RPM’s. It did take some getting used to but I imagine anyone familiar with this size won’t have an issue.

The Tiny Attack is delivered without a receiver so you’ll need to add one. Most will probably do as I did and add something an FrSky XM+. The included cable is ready to solder to 5V, Gnd and SBUS then plugs directly into the FC. Even a small RX like this takes up most of the space in the canopy but it fits fine and attaches well with a 3M sticky pad. I ran the antennas down and under the arms, secured with a little tape.

The FC has a built in RGB LED but unfortunately it points straight up from the board so my RX covers it. I can’t see a way to fit a proper RX in without this issue although I’m sure a less capable and smaller version could work.

My version was shipped with Betaflight 3.5.6 and it comes pre-loaded with specific PIDs and rates for the setup. If you’re going to reflash remember to make a note of these or save your betaflight profile before flashing.

The instructions recommend Oneshot42 and reverse prop direction for best performance. Oneshot42 sounds like a bit of a backwards step but in reality a quad of this size either works or it doesn’t and the ESC’s spin the motors up just fine.

Reverse prop direction was not set in Betaflight. If you do choose to change to the recommended reverse settings you’ll need to switch the props around too. Once you have set up your RX and modes as normal you should be ready to go fly. 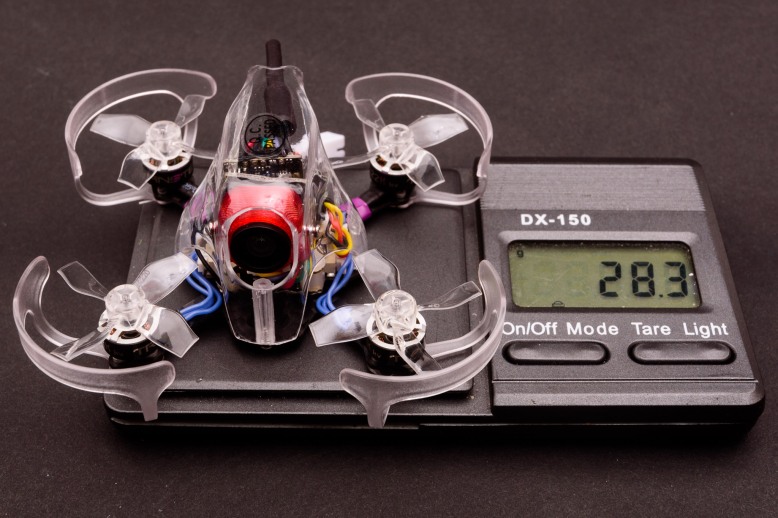 I have to say I am surprised by the performance of this tiny little thing. At 28g it just doesn’t feel like you should be able to pull off some of the moves that you can. At first I was expecting it to react like a larger quad, but smaller and it felt underpowered. Once I started getting used to the rev range and where the power is it became easy to throw it around and stay level around fast corners, traditionally the downfall of the tinywhoop.

I’ve been flying with the Emax 450mah HV packs and getting around 2 minutes before landing at 3.1v and seeing the voltage rise back to 3.5v which I consider about the limit. I’ll be testing with other packs and props to see what the optimal setup is.

I’ve crashed it quite hard into various walls, floors and beams and so far it has shrugged it off. The prop guards are flexible and seem to do a good job at absorbing the impacts.

The camera is great and the signal is strong. Unfortunately the OSD is quite dim on the screen. The instructions even mention that this is the case with ‘batch 1’. It works but if it’s a known issue it should be fixed before batch 2, rather than just telling us you know about it.

So far, so good for the Tiny Attack. If you want to see more content like this just search ‘AttoFPV’ on social media to find us. 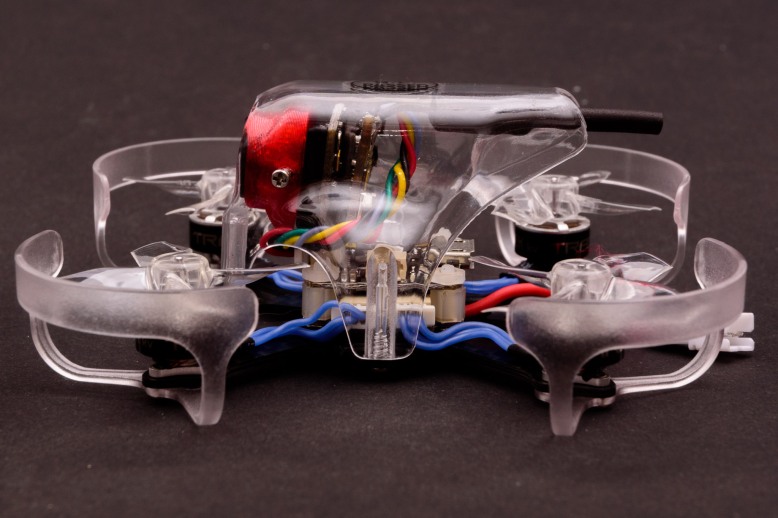